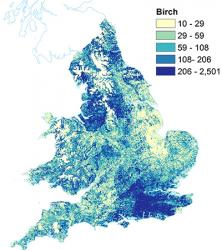 Led by Dr. Rachel McInnes, Met Office Climate Impacts Scientist and one of the core NERC PollerGEN team, the article was co-authored with a number of additional PollerGEN team members. The 2017 Science of the Total Environment publication is reaching a record readership.

We are pleased to report that in the first 3 months of its publication, this article received 36,000 downloads.  This is the highest downloaded article from Science of the Total Environment in the period April – June. The paper is also in the top 5% of all research outputs ever tracked by Altmetric. We are thrilled our work is reaching such a wide audience – clearly showing the relevance of this field of research.

Since being published in May 2017, this article is now close to 40,000 downloads. Readers have come from all over the world, with the highest numbers coming from the United States, UK, China, Australia, Netherlands, Germany, Italy, India, France and Hungary.

The paper itself links closely with work being done by Rachel and the team on PollerGEN, who are now working to map individual allergenic-pollen producing grass species in the UK. Linking these new maps with accurate incidence data derived from molecular genetic analysis and aerobiological modelling (http://pollergen.bangor.ac.uk/methods.php.en), we will begin to understand more about the aerial release and transit of pollen in relation to human health.

The paper has been published ‘open access’ and so can be downloaded for free here.